What is the importance of beach tourism

Climate impacts for tourism on the North Sea coast

Every year around 3 million holidaymakers travel to the German North Sea coast. 65% of the visitors spend their North Sea vacation during the summer (Heinrichs and Bartels 2011). Thus, the expected extension of the summer season could primarily have positive economic effects in the tourism industry, because overall the bathing season could be extended by 60 days by 2100 (Heinrichs and Bartels).
See: "Effects of Climate Change on the Ecosystems of the North Sea"

Regional climate scenarios indicate that on the North Sea coast, summer daytime temperatures can become warmer, but an increase in the frequency of days with heat stress is not to be expected (Heinrichs and Bartels 2011). Since the mid-eighties, an increase in water temperatures has also been recorded, so that the opportunity for bathing is increasingly given.

Negative effects of climate change on North Sea tourism are expected primarily from rising sea levels and higher waves, which can reduce and erode the beach. This would have a direct impact on beach tourism and could damage tourist infrastructures along the coasts (Heinrichs and Bartels 2011).
See: "Effects of Climate Change on the Ecosystems of the North Sea"

In addition, the coastal protection measures required by the end of the 21st century and the economic interests of the tourism industry could lead to conflicts of use on the North Sea coast. Another negative consequence of climate change for tourism would be that toxic algae in the North Sea would be favored. As a result, guests could suffer from shortness of breath and mussel poisoning (Heinrichs and Bartels 2011). In addition, more jellyfish could reduce the attractiveness of the location for bathing tourism.

Rising numbers of tourists would also lead to increased pressure on natural areas. In the context of sustainable development, these ecological aspects must not be neglected (Heinrichs and Bartels 2011).

External factors, such as rising oil prices, changed travel behavior (e.g. more short trips, higher quality standards, individually tailored travel packages) and new target groups that could arise from demographic change, among other things, will also have an additional influence on the tourism industry in the future. In addition to possible climate changes, these factors should be taken into account when planning sustainable tourism development.

The question of what significance the climate has for travelers in relation to the external factors mentioned has not yet been adequately researched scientifically. So far there has been no modeling that systematically links climate scenarios with tourism scenarios based on social science (Heinrichs and Bartels 2011).

Climate impacts for tourism on the Baltic coast

Characteristics of German tourism in the Baltic Sea

Tourism thus plays an economically important role in both federal states and, with more than 4% (SH) and 10% (MV), represents an important part of the economic added value (Ministry for Economy, Labor and Tourism Mecklenburg-Western Pomerania 2010, Tourismusverband Schleswig -Holstein 2010). The attractiveness of the Baltic Sea coast lies in the natural potential of the coastline and the well-developed tourist infrastructure in many holiday resorts. In both federal states, the focus is on coastal tourism, as the beach as the direct contact area between the sea and the coast and the sea as a water sports area are the main attractions for visitors. The beach and bathing tourism offer is supplemented by the city and cultural tourism offer in maritime Hanseatic cities such as Lübeck, Wismar or Stralsund.

Dependence on the climate

Due to its strong dependence on natural, economic, political and social framework conditions as well as its cross-connections to many other economic fields, tourism is considered an economic sector that is sensitive to change (Scott, Hall, Gössling 2012).

Climate change is an important factor in changing tourism framework conditions: even if the World Tourism Organization UNWTO sees tourism in moderate latitudes as a potential winner of climate change due to temperature increases and possible season extensions (UNWTO 2008), it is definitely relevant for the Baltic Sea coast to focus on potential Discontinue changes. Changed climatic conditions mean a challenge for tourism, because the attractiveness of tourist destinations is largely determined by the prevailing climate.

The perception of "good weather" by tourists is subjective: Sun and warmth are desirable for most bathers and at the same time only attractive to a limited extent for many active vacationers; Strong winds are a hindrance for cyclists, but for sailors and windsurfers it is an essential requirement for a successful holiday. The assessment of opportunities and risks of direct climatic changes for tourism in the Baltic Sea is therefore only possible to a limited extent over a large area and generally requires a significantly smaller, regional and sectoral scale. In many cases, climate changes only become climate impacts when their regional and sectoral influence is interpreted.

In addition to the direct effects of changes in temperature and precipitation, their subordinate effects on tourism in the Baltic Sea also play a role. Warmer summer air and water temperatures could make this travel destination more attractive, for example, compared to southern European destinations, where increasing heat spells and effects are to be expected. The consequences would be a shift in tourism flows and an associated increase in the number of visitors in the main season as well as an extension of the season to spring and autumn. These consequences have the potential to further increase the pressure to use tourism in the sensitive coastal system. In the summer of the German Baltic Sea, capacity limits are already being reached in some places - in the future, climate change could therefore lead to mass tourism phenomena (Ministry of Economics, Labor and Tourism Mecklenburg-Western Pomerania 2010), which are considered attractive to today perceived originality of the region pose a risk.

The water quality of the Baltic Sea can also be affected by indirect effects. Higher water temperatures and changes in the amount of rivers entering the Baltic Sea due to shifts in precipitation can influence the growth of algae, seaweed and jellyfish and promote the multiplication of bacteria, which under certain circumstances also pose a risk to humans. Both the quality perceived by tourists and the measurable quality of coastal bathing waters could deteriorate as a result (Roijackers, Lürling 2007). Although the establishment of the Baltic Sea Action Plan in 2007 created an important instrument for regulating nutrient inputs into the Baltic Sea, there are feedback effects with climatic changes and possible shifts in the species structure of the Baltic Sea ecosystem (immigration of new species, endangerment of existing species) not yet adequately researched.

Another consequence of changed climatic parameters, which the local tourism industry is increasingly concerned about, is the possible threat to the coastline used for tourism. Increased erosion of the cliffs and the beach on the German Baltic Sea coast is a possible consequence of climate change; Rise in sea level, the increase in the frequency or intensity of extreme weather events such as storm surges or heavy rain and possible changes in currents and waves can severely affect the coastal strip and thus the most important resource of Baltic tourism (Fröhle et al. 2011). 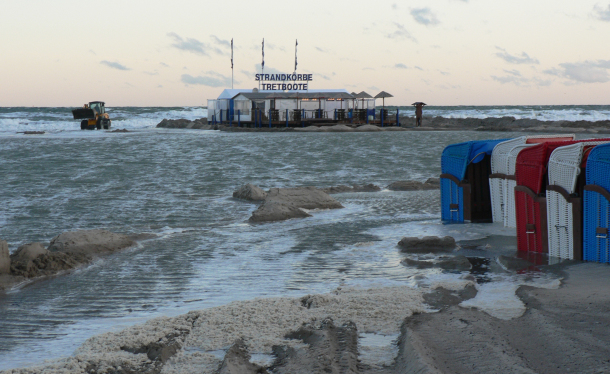 Official coastal protection alone does not necessarily protect the municipalities from the beach used for tourism in front of private hotels or holiday apartments. In times of scarce public resources and increasing pressure from the seaside, the coastal towns could face the challenge of developing their own financing concepts for beach maintenance in the future.

The options for adaptation usually require a regional analysis and are based on the individual nature of the individual travel destinations. What is difficult with statements on this, however, is that climate change is not the only influencing factor on tourist demand. Changes in income structures, social and political developments, fashions and trends as well as other factors influence not only climate change but also demand and tourism flows and are in turn influenced by the climate (Scott, Hall, Gössling 2012).

Many parts of the tourism service chain, from guests to tour operators and transport companies, can be affected by the negative effects of climate change. You reorient yourself and make new decisions for or against a travel destination. If these lose their attractiveness, they will no longer be visited or offered. Many travel destinations, and thus also the coastal communities on the Baltic Sea, must therefore take structural, strategic and organizational measures in order to be perceived as an attractive holiday destination even under changed climatic conditions (Becken, Hay: 2007).

In doing so, however, they are faced with the question of the time windows in which action must be taken and which future climate scenario from the range of the IPCC report appears most realistic to them. In particular, the temporal expansion of the planning horizons often collides: While purely tourist planning often extends from season to season or at most for a few years, the scientific statements on climate change with scenarios over decades or even centuries refer to a significantly longer time horizon.

In general, therefore, so-called “no-regret” measures are also useful in tourism, which aim not only to adapt to climate changes, but also to increase the attractiveness in a sustainable manner independently of this. From a touristic point of view, a potentially increasing pressure of use through increased growth must be taken into account.

The challenge for local authorities and associations is to develop sustainable growth concepts. The inclusion of climate adaptation aspects can, for example, be used in the construction of coastal protection measures, traffic control planning (e.g. distribution of traffic outside the coastal locations, possibly supplemented with the expansion of public transport connections) or the expansion of infrastructure, such as supply and disposal, alternative offers near the coast (e.g. swimming pools or other leisure facilities) are made possible. For these planning processes, all those involved must be informed about the possible consequences of climate change - also about ranges and uncertainties.

Decision-makers in tourism need credible and reliable information. The current main focus of tourist climate adaptation has so far been less on the implementation of practical adaptation measures, but rather on the transfer of information, the establishment of networks and communication chains and the development of strategic planning concepts. These tools can already be used to deal with short-term events (blue-green algae blooms, increased occurrence of problematic germs, but also harmless jellyfish or beach throwing) and also form the basis for establishing long-term adaptation strategies.