Let's move towards a cashless society

The idea of ​​a cashless society deals with the assumption that transactions only take place digitally. Accordingly, there should be no more cash in the future. In such a cashless world, business should be done using either online banking or mobile payment methods.

In principle, one can say about the idea of ​​a cashless society that society as a whole depends on what it knows. Individuals are always easier to convince of something than a collective. However, this does not mean that our society will not be able to say goodbye to cash at some point. Rather, it means that it cannot happen overnight overnight. We are many years away from a cashless society.[1]Schuldt, Christian: "The Future of Money", https://www.zukunftsinstitut.de/artikel/die-zukuenfte-des-geldes/, accessed on November 20, 2018.

One reason why society changes slowly is the fear of loss of value. Even if this fear is only psychological, it is still present. So far, when paying with cash, you can see what value you are spending on something. For example, what you buy in the supermarket for 1.99 €. Without cash, however, there is no intuitive assessment of the goods based on the cash transferred. Thus, the purchased goods could lose value in the eyes of the buyer, which in conclusion also lowers the value of the means of payment.

However, these assumptions by the buyer are purely subjective and do not always reflect the truth. Even if a good is no longer bought with cash, it still costs the same. The only difference is the payment method. Likewise, cash and money in the bank have the same value.

Following on from the idea that cashless payment reduces the value of something (subjectively), it can also be argued that status symbols are (subjectively) less valuable. Since status symbols are items that can usually only be obtained through special expenditures, these would also lose value due to the implied depreciation of the money.[2]Consultant: "The future of money", https://finanzwelt.de/die-zukunft-des-geldes/, accessed on November 20, 2018. But even here it is something that only happens in the mind of the buyer. The expense remains the same, only that you pay by bank transfer instead of cash.

A cashless society always presupposes that society accepts this change, or at least does not oppose it. However, many people see cash as an iron reserve for emergencies or even a concrete fall-back level in times of crisis. According to these findings, a cashless society is unthinkable in the near future.[3]Winters, Georg: "The money of the future", https://rp-online.de/wirtschaft/das-geld-der-zukunft_aid-19032305, accessed on November 20, 2018.

A study from 2015 shows that only a fifth of the German population would be willing to deposit cash. In view of this result, it should also be noted that the traceability of the money plays a major role. It is important for many to know exactly what is being bought, when, how, in what quantity and at what price.[4]"Survey on the abolition of cash in Germany 2015", https://de.statista.com/statistik/daten/studie/431341/umfrage/umfrage-zur-bargeld- Abschendung-in-deutschland/, accessed on December 10, 2018. 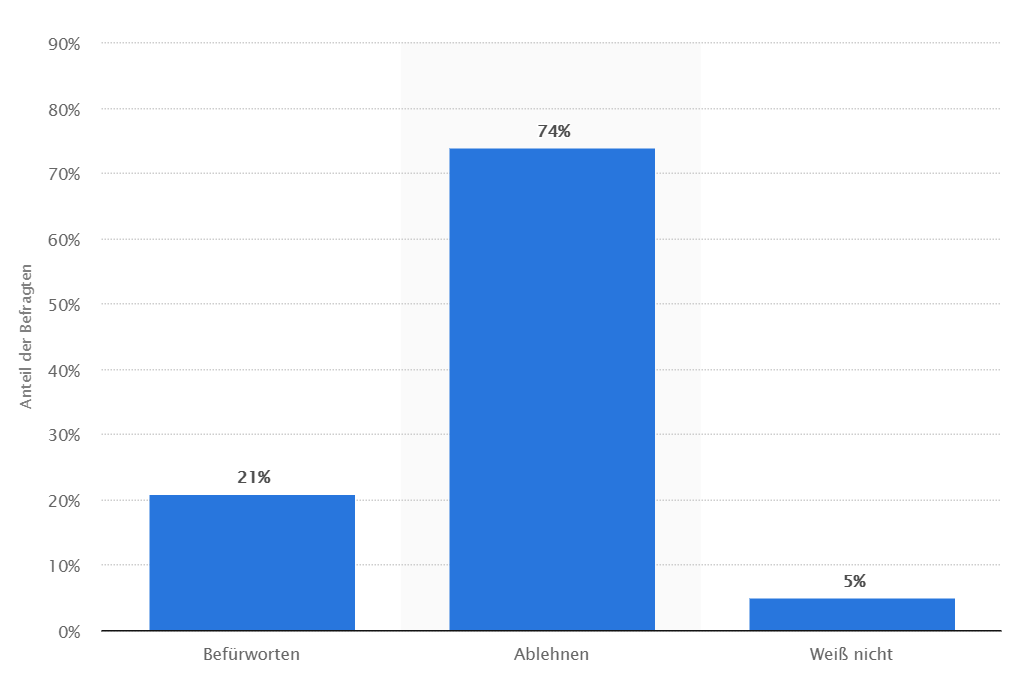 However, this attitude is not only attributable to the desire for traceability, but also to the desire for the security of one's own money. Because this is another aspect that influences society. Alternatives to cash must be able to demonstrate a similar level of stability that wins the trust of citizens.

So it can be said that cash will continue to play an important role in the development of money. Be it as a fall-back level or as a safety net. However, it must be noted that digital payment methods and currencies are still on the advance and a replacement of cash as the most recognized payment method is quite possible in the distant future.

Sweden is a pioneer and a good example of a future without cash. There could be no more cash payments in five years. Many retailers already only accept debit and credit cards. This could make Sweden the world's first cashless society.

This fact is largely due to the fact that banks and dealers are not obliged to accept coins and bills. Sometimes they hang “no-cash” signs on the cash registers. The cash is also difficult for them to get rid of, as half of all bank branches no longer issue or accept cash.

Another reason for Sweden's lead in cashless payments is that Swedes prefer to pay with cards, apps or online transfers. This turning away from cash can also be seen in the fact that the total value of cash in circulation has fallen by more than half since 2007.

The only criticism comes from the elderly and those who generally prefer to pay with cash and have no alternatives.[5]Bigalke, Silke: “This is how the first society without cash emerges”, https://www.sueddeutsche.de/wirtschaft/schweden-so-entistan-die-erste-gesellschaft-ohne-bargeld-1.4003789, accessed on January 4, 2019.