What exactly led to the Iraq crisis

Iraq war: in the beginning there was a lie

It took almost three weeks for the statue of Saddam Hussein to be overthrown in Baghdad and on millions of screens around the world after the start of the US-led invasion of Iraq. The picture from April 9, 2003 went down in the collective memory of mankind. But even 15 years later there are still many unanswered questions. It is unclear, for example, how many deaths the Iraq war and the subsequent chaos among the local population caused.

Most estimates vary between 150,000 and half a million deaths. Some serious studies even come up with significantly higher numbers: the respected medical journal "Lancet" calculated the number of over 650,000 "additional deaths" as early as 2006. In addition to the sheer violence, the consequences of the bombed infrastructure and the destroyed health system were also taken into account.

What we do know, however, is that the reasons for this armed conflict were based on lies. There is a second image of the Iraq war that belongs to the collective memory: That of US Secretary of State Colin Powell in his speech to the UN Security Council on February 5, 2003. Six weeks before the war began, Powell roused the world public for 76 minutes the war. Central content of his speech: Saddam Hussein is in possession of biological and chemical weapons of mass destruction; his regime supports international terrorism and aims to build nuclear weapons.

The presentation culminated in a claim supported by detailed illustrations: In order to evade the extremely strict controls of the UN weapons inspectors, Iraq had converted a fleet of trucks into rolling chemical and bioweapons laboratories. Powell's speech has been remembered for one main reason: all of these claims turned out to be false. Powell himself described this speech in 2005 as an eyesore on his career. 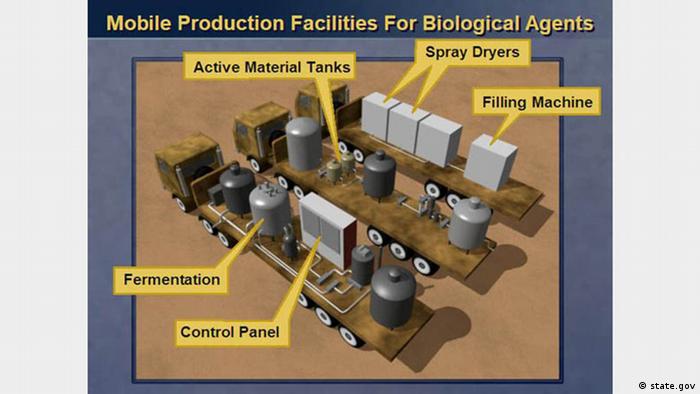 Slide from Colin Powell's presentation - based on "Curveball"

In 1999 the Iraqi chemist Rafed Ahmed Alwan came to Germany as a refugee. The BND becomes aware of him and interrogates him. The German secret service agents are hoping to get information about Saddam Hussein's weapons of mass destruction. Alwan - under the code name "Curveball" - realizes: the more information he provides, the better his status: he gets the German passport; there is money, an apartment of your own.

This continues until the BND tracks down the former boss Alwans. He tears apart the web of lies. The German secret service agents are also informing their American partners about this. Nevertheless, after the 9/11/2001 attacks, interest in "Curveball" reawakened. The daily newspaper "Die Welt" reported in August 2011, citing the former BND President August Hanning, that the Americans had demanded a binding declaration from the Germans in 2001 that the statements made by "Curveball" were correct. Hanning refuses and writes to CIA chief George Tenet: "That so far no third party has provided information similar to our source and that these findings can therefore not be considered verified." 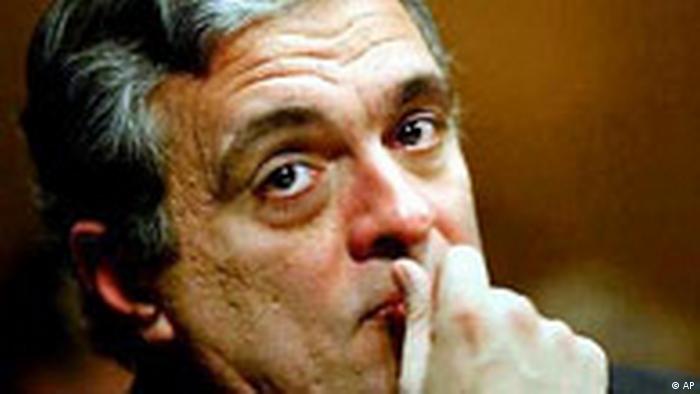 Despite further clear warnings about the truthfulness of "Curveball's" statements, they become the centerpiece of Powell's promotion of the war. Ray McGovern is sure, "They didn't care if Curveball knew what he was talking about. They had something to go public with. Something they give to the creative and professional people in the CIA's graphics department And then they could draw the non-existent mobile chemical weapons labs that Powell used in his presentation. "

A representation that the then European head of the CIA, Tyler Drumheller, confirmed to the British Guardian in 2011. Long before 2003 he had been warned by his partners at the BND that the statements by "Curveball" were not reliable. He had passed these warnings on several times to CIA chief George Tenet - "until the night of Powell's speech," Drumheller told the Guardian.

The administration of the 43rd US President George W. Bush wanted war. The basis for the US invasion was laid long before September 11, 2001, explains the former EU foreign policy representative and former NATO secretary general Javier Solana in an opinion piece for Project Syndicate on the occasion of the 15th anniversary of the beginning of the war - although she was called Part of the "war on terror" had been sold. Solana recalls that shortly after his election as president in 2000, George W. Bush made Iraq one of his two priorities in security policy. 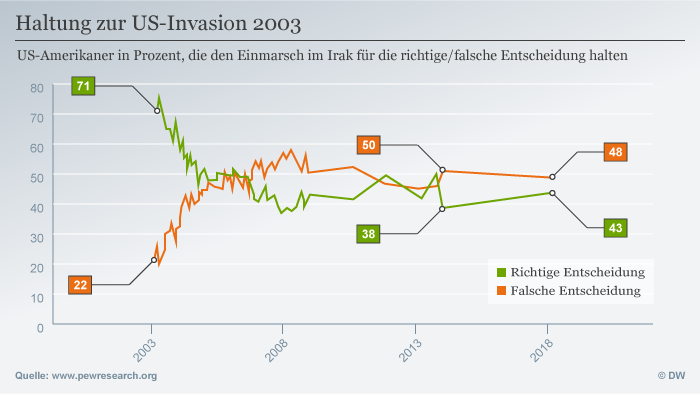 The British allies were also brought into line early on. In May 2005, the Sunday Times of London reported the contents of a top secret memo. Subject: a meeting on Iraq with then British Prime Minister Tony Blair on July 23, 2002. Among others: Foreign Secretary Jack Straw, Defense Secretary Geoff Hoon, Attorney General Lord Goldsmith and also the head of the MI6 foreign intelligence service, Sir Richard Dearlove, in the memo traditionally designated with "C".

Dearlove reported from a meeting in Washington with CIA chief Tenet shortly before: "Military intervention is now considered inevitable. Bush wants to remove Saddam with a military strike, justified by the combination of terrorism and weapons of mass destruction. But intelligence and facts are becoming politics arranged around. " Foreign Minister Straw objected - rightly -: "The evidence is thin. Saddam does not threaten any of his neighbors and his mass destruction capabilities are less than those of Libya, North Korea or Iran."

And attorney general Goldsmith said on record that "the desire for regime change is not a legal basis for military action." However, these concerns do not prevent Blair from going into this war in the interests of "special relations" with the United States. 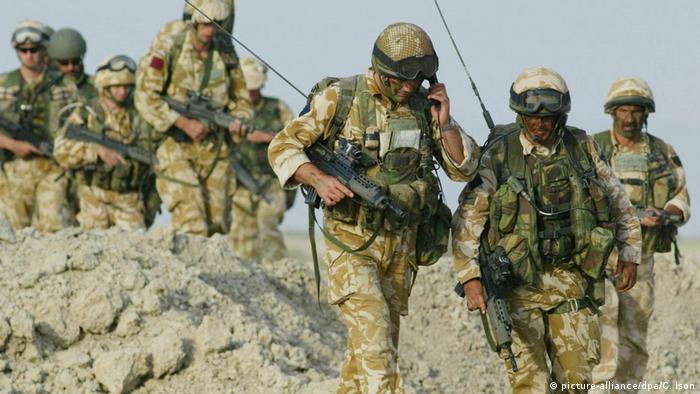 Germany's participation - despite Schröder's "No"

A war which, according to the Cologne lawyer Björn Schiffbauer, was "an illegal act of violence, an illegal war between the USA and its allies". A war in which Germany was also - at least indirectly - involved. Germany had officially refused allegiance to the USA in the Iraq war. The then Chancellor Gerhard Schröder had won the federal elections in 2002 because of his "No to the Iraq war".

And yet, remembers the former Bundeswehr major Florian Pfaff to DW, the Bundeswehr was heavily involved in the Iraq war: "The Bundeswehr, for example, stocked the Awacs, guarded the US barracks so that the US soldiers were released are for the war. They provided logistical help, from the socks provided to the bombs. " 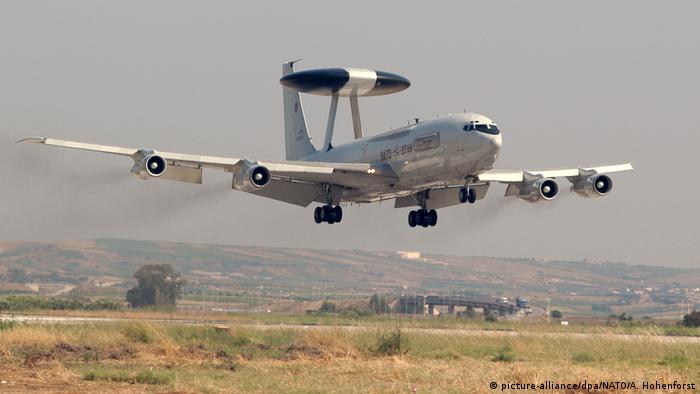 Major Pfaff worked as an IT specialist in early 2003. He does not want to participate in a war of aggression that is contrary to international law. He announced to his superiors: "I will now check all orders and if I find out that I am involved in the war, then I will not carry out these relevant orders." In response, his superiors sent him to a mental hospital for a week.

Pfaff in an interview with DW: "I was already familiar with rumors from communism that one would be admitted to a psychiatric hospital. Fortunately, they found out: I am very healthy." The Bundeswehr, which was not officially involved in the Iraq war, was exerting massive pressure, the public prosecutor switched on. In 2005, however, the Federal Administrative Court in Leipzig ruled: Pfaff has the right to refuse to support a war which, for very understandable reasons, he considers to be contrary to international law - and therefore illegal.